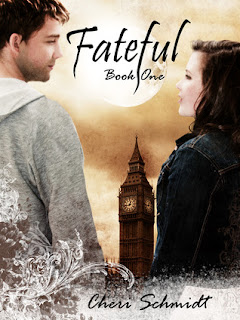 There aren’t a lot of surprises in Fateful. Character-wise, Ethan, our vampire love-interest, boasts the looks and presence of an angel, first appearing just in time to rescue her from a shadowy demon of a man in a dark alley. Ethan also drives a Jaguar that he has no obvious means of affording, as well as a perfect family of fellow non-humans who are graciously warm and welcoming to the very human and warm-blooded girl he brings home. All but Celeste, anyway, who’s harboring an unrequited love for Ethan and takes it out on Danielle.

Food-wise, too, there are all the standards; while Danielle is going to art school in London, she’s staying with her British relatives, who treat her to all the English staples:  fish & chips, bubbles & squeak, scones with clotted cream, and of course daily tea (which our heroine takes in the very decidedly wrong American way).

But beyond all that has become so familiar to the genre, Schmidt does offer a unique take on the vampire diet; the vampires cook for Danielle, not just out of politeness to their human guest, but because they want her to describe to them the flavors.

Danielle began to feel weird about eating alone as three vampires watched with interest. “Uh, I don’t mean to be rude, but why is my eating so fascinating to watch?”
Sophia answered, “I’m sorry, Danielle, it’s just that we had such a fondness for food, but it doesn’t taste the same as it did anymore. It looks like it should taste so delicious, because it is just so … wonderfully colorful.” Her brows pressed together as if she thought “colorful” may not be the best word to describe food, but it seemed it was all she could come up with. “The truth is ... an all blood diet gets horribly tiresome.”

I hadn’t really considered the vampire palate from that perspective before, but it makes perfect sense…and makes their perfection slightly less enviable. Would I be able to give up the delicious smorgasbord that is human cuisine in exchange for the glory of immortality? I don’t know; I’m thinking even pizza-flavored blood would lose its appeal over, say, an eternity…
Posted by Shelley Workinger at 2:07 PM