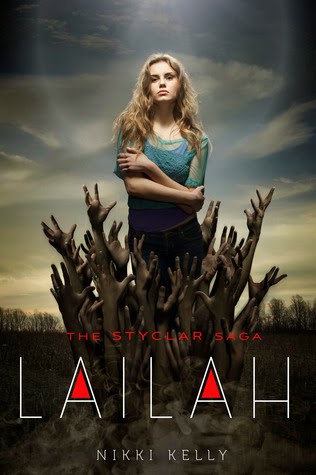 When this story begins, Lailah is not in fact “Lailah” at all. She’s Francesca (Cessie), a vampire slayer, frozen forever at age 17. Fortunately she has the bone structure (and fake I.D.) to pass for 21, allowing her to take jobs at the sort of shady establishments where she is most likely to cross paths with the monsters she hunts. Less fortunate is that, as often as not, these encounters lead to her death. Yes, encounters, plural. And deaths, also plural. Yet Cessie is unfailingly reborn at 17.

And it’s only that immortality, along with the inhuman ability to heal from the non-fatal wounds, which confirms for her she’s in the right line of work, for she has no family to guide her. There is not one consistent person in her life/lives, unless you count Gabriel, who repeatedly visits her dreams.

Of course, when real-life Gabriel actually catches up with Cessie in present-day Wales, everything changes. First, he calls her by her given name! But he tells her nothing else of her original life, instead activating her ability to conjure up memories of her past herself. And the magic potion with which he does this is…lemonade.

He pours it for Lailah – real, fresh lemonade, nothing quite like it. The crisp, bitter flavor [dancing on her] taste buds with a clean, dry finish.

Yes, the author does describe the taste, though she needn’t have. We read the word lemonade and it immediately triggers sensory reactions in all of us. At the very least, we see the bright yellow (or perhaps pink) liquid, smell the sharp citrus, feel our mouths water and maybe our lips pucker. And most of us can readily conjure up a memory of our own involving this signature drink, just like Lailah, for whom the aroma [fills her] senses and, against [her] wishes, memories [begin] to cascade in.

With one sip, she remembers her past clearly for the first time. She sees that she and Gabriel have not only intersected in dreams, but in past lives. Decades of history between them and here he stands, as untouched by age as she. Now, the secret of youth for Gabriel, the angel of Lailah’s dreams, is that he really is an angel. But for Lailah, the answer is not as clear…
Posted by Shelley Workinger at 9:56 AM