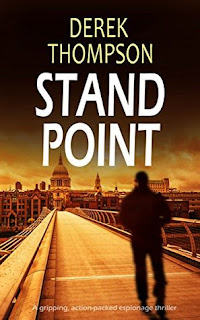 Thomas Bladen, a spy worth his salt
Derek Thompson looks at his main character’s relationship with food.

Not all spies are suave and sophisticated. Thomas is smart, sardonic, and rough around the edges. He works for Britain’s Surveillance Support Unit – loaned out to any government department that will have them, including law enforcement and intelligence agencies. Other departments call them floaters – it’s not a term of endearment.

Although Thomas works for the SSU in London, this son of a Yorkshire miner has never lost touch with his working-class roots. He’s a man who eats to live rather than living to eat.

A meal out with Miranda, the epicentre of his complicated love life, runs to tuna steaks and red wine. But it’s Miranda who knows how to make his mouth water.

“We never got to dessert,” she said, slinking past him, with an overnight bag over one shoulder and a carton of vanilla ice cream in her hand.

In the office he functions on vending machine coffee and chocolate bars. Out on the streets with Karl, he favours a ‘greasy spoon’ café for a sausage and egg sandwich on white, no ketchup. Sometimes it’s a fry-up; surveillance work demands patience, vigilance, and calories!

Further conversation was parked as they made their way through a meal fit for a king — a king who enjoyed mushrooms, eggs, tomatoes, sausages, bacon, toast and beans.

Karl managed to cram sausage, bacon and beans into his mouth, and still talk.

Thomas found that a conscience wreaked havoc on his appetite so he played safe with a large mug of tea and a meagre two eggs on toast. He jabbed at the eggs so that they bled yellow and swept the plate with toast, sluicing the yellow into ketchup.

Keeping unsociable hours, Thomas relies on takeaways, usually Chinese food or an Indian curry – the hotter the better. Or else he throws together whatever’s in the kitchen.

A cheese omelette with bacon bits in it and bread that was only good for toasting.

He left her to it, put the kettle on and dug something resurrectable out of the freezer — two portions.

He’s not a serious drinker because it impairs his judgement. And for Thomas, nothing matters more than being in control.

They agreed to share a bottle of wine — her treat. He quickly got into the rhythm of their non-date. By dessert he’d noticed her legs again.

When Thomas and Karl need a neutral space to talk things through, they head over to a pub for shandy and crisps (potato chips in the US). Man, they lurve crisps!

The only time when Thomas seems to eat a two-course meal is with Miranda’s family, where it’s a traditional British Sunday roast dinner or pizza and salad, followed by dessert. You could say he’s a traditionalist. Even when he goes back up to Yorkshire to see his family for his annual guilt trip, the good is usually wholesome and uncomplicated: fish & chips — a feast for the prodigal son. https://en.wikipedia.org/wiki/Fish_and_chips

Thanks for stopping by to share your food for thought, Derek! 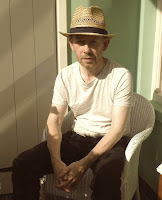 You can find Derek here:

Books on Amazon US

THE WRONG MAN IN THE RIGHT PLACE CAN MAKE ALL THE DIFFERENCE.

Thomas Bladen has been living a double-life for two years. He’s a Civil Service photographer in London, but the Surveillance Support Unit has a much wider remit. It’s staffed by ex-forces personnel, careerists, and Thomas. He has an eye for details that other people miss and a talent for finding trouble – a combination that was never going to bring him an easy life.

When Thomas witnesses a shooting on a routine surveillance operation and uncovers a web of deceit and treachery that people will kill for, can a good man hold the line without crossing it?

When Thomas uncovers a sinister secret that threatens both the UK and the European Union, his life and the lives of those closest to him will never be the same again.

Posted by Shelley Workinger at 7:54 PM