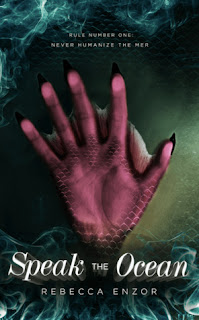 Thanks so much for inviting me, Shelley! I’m a huge foodie myself, although I can’t cook much more than frozen pizza or boxed mac and cheese (Hubs, however, is an amazing cook!). And while the human side of my story contains more drinking than eating (my human MC just turned 21 and is enjoying it), the mermaid side of the story is heavily driven by a lack of food.

Over-fishing has my Mer characters leaving the safety of their deep-sea home and taking dangerous chances to find enough to eat. My mermaid protagonist, Erie, is caught on a desperate hunt when she pushes another Mer out of the way of the “landfolk” nets. Once she’s trapped at the marine park, she refuses to eat the dead fish that were trapped in a net like she was. One of the first air-words she learns is “breakfast.”

The pivotal scene when she first speaks to her human trainer revolves around him trying to bribe her into eating a dead fish (Mer only eat live fish, so she’s really grossed out by this). There are several scenes throughout the book that focus on her not-eating, including my favorite line: “when he throws a dead fish in the water, I throw it back.” I can just imagine my pissed-off mermaid throwing a dead fish at my human trainer, and him trying to duck while getting hit with a cold, wet, dead fish. Knowing him, there’s definitely an expletive involved!

I can’t say too much more without giving away key parts of the book, but while it focuses heavily on the morality of subjugating other species to the whims of human entertainment (orcas at Sea World, for instance), it’s also about our effect on the food chain in the ocean. As we overfish and pollute the waters other species depend on, we’re also destroying a source of food that we depend on too. Eventually, we’ll be just as hungry and desperate as the Mer.

Thanks for stopping by and sharing your food for thought, Rebecca!

You can find Rebecca here:

Rebecca Enzor is a fantasy author and analytical chemist in Charleston, SC, where she lives with her husband, two dogs, three cats, and sometimes chickens. Her articles on writing science in science fiction can be found in “Putting the Science in Fiction” from Writer’s Digest Books. Obsessed with everything ocean, she studied fisheries biology in college and electrocuted herself collecting fish in a river, which inspired several key scenes in her novel. Speak the Ocean, a Blackfish meets The Little Mermaid retelling, will be published by Reuts Publishing in July 2019. She’s represented by Eric Smith of P.S. Literary.

Posted by Shelley Workinger at 9:29 PM