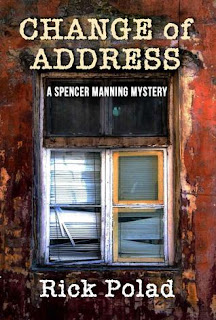 When Shelley asked me to write a blog about my books and food, my first thought was that I wouldn’t have enough material for a paragraph much less a blog. After all, my books are about Spencer Manning and the cases he works on, not food. But after some thought I realized food is an integral part of my books and Spencer’s life for several reasons. The first is, fictional characters need to eat too, albeit fictional food. The second is, food plays a major part in advancing the story, especially in a mystery novel.

As the cases develop, Spencer needs to let the reader know what he is thinking so the reader can be involved in trying to figure out who did it. And what better way to do that than to have Spencer converse with other characters. He dines twice a week with Lieutenant Stanley “Stosh” Pawolski of the Chicago police and less often with his romantic interest, Detective Rosie Lonnigan. Gino’s East, one of Chicago’s favorite spots for deep dish pizza, is one of their favorites, as is Carson’s for ribs. Over a meal, they talk about the case.

Another reason for including food in the stories is purely selfish. I get to eat vicariously through Spencer. He gets to eat all the things I shouldn’t… steaks, burgers, pizza, ribs, lasagna. And he doesn’t have to eat vegetables. And he frequents some pretty fancy restaurants. My books are set in Chicago during the 1980s, so I had to rely on my memory and research to be historically accurate. Some restaurants are still here thirty-five years later. Some are not. And some exist only in my imagination.

In the first book in the now seven-book series, Change of Address, Spencer frequents one of the best steak houses in Chicago… Gibsons, one of my top three culinary experiences.  But in that same book, Spencer and Rosie dine at Stantons. It’s a restaurant on the shore of Lake Michigan in a North Shore suburb of Chicago. Every table overlooks the lake and Spencer and Kelly sit on the terraced veranda with drinks before dinner. The most frequent question I have had about my books is “Where is that restaurant? I want to eat there!” Unfortunately, it’s only in my imagination. Also in my imagination is the deli next to Spencer’s office.

But the place that holds the books together is McGoons, where Spencer is known by name and often meets with one of his many sidekicks for steak and beer and to discuss a case.  McGoons is a creation of bits and pieces from my memory of Chicago pubs.

In the third book, Missing Boy, Spencer visits the original McDonald’s (after Kroc took over) in Des Plaines and laments plans to tear it down. A museum was later built on the site. And as I was writing this, I realized Spencer has never had a Chicago hot dog. I’ll have to fix that in the next book. Bon appetit!

Thanks for stopping by to share your food for thought, Rick!

You can find Rick here:

Books on Amazon
Posted by Shelley Workinger at 11:54 AM