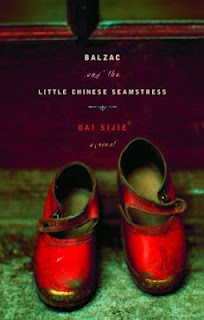 “I’ve never seen anyone so poor in my life! Do you know what he takes with his liquor? Pebbles! I swear it’s true, on the head of my mother. He dips them in salty water, puts them in his mouth, rolls them around and spits them out again. He says this dish is called ‘jade dumplings with miller sauce.’”

So Four-Eyes tells Luo and the narrator (who remains nameless throughout the book) of his visits with the miller, from whom Four-Eyes must gather ancient songs to publish when he returns home from the mountains. Not only do Lou and Narrator then go to the miller’s house and witness his partakage for themselves; when their fellow “student” loses his trademark glasses and cannot see, they volunteer to carry his sixty kilos of rice up a treacherous mountain path to get there. They even go so far as to sample the “dumplings” – a vile experience made even worse when Luo accidentally refills a round with lamp oil instead of liquor.

What could possibly make these two teenage boys, whose “re-education” (as mandated for all children of intellectuals as part of Chairman Mao Zedong’s cultural revolution) in a village in “a lost corner of the mountains” includes hauling back-buckets of excrement up (yet another) treacherous mountainside, invite even further misery?

Books. They’re forbidden, but Four-Eyes has a secret stash that Narrator and Luo will clearly do anything to get their hands on.

Books? Really? you ask. Please indulge me this extended excerpt, as the narrator himself expresses his feelings far better than I could hope to paraphrase:

Let me tell you about Romain Rolland. Among the books in Four-Eyes’s suitcase there was only one by him: volume one of his four-volume masterpiece, Jean-Christophe…As the story was about a musician and I myself played pieces on the violin such as Mozart Is Thinking of Chairman Mao, I was naturally drawn to the book. I had intended only a brief flirtation, a skim read, but once I had opened the book I couldn’t put it down. Until then short stories had been my favourite reading: well wrought and sparkling with ideas, tales that made you laugh or took your breath away, that would stay with you for the rest of your days. I was more dubious about full-length novels. But Jean-Christophe, with is fierce individualism utterly untainted by malice, was a solitary revelation. Without him I would never have understood the splendour of taking free and independent action as an individual. Up until this stolen encounter with Romain Rolland’s hero, my poor education and re-educated brains had been incapable of grasping the notion of one man standing up against the whole world.

Now sucking a few pebbles seems a small price to pay for that.

*I listened to the audio version of this book and immediately recognized the reader as B.D. Wong, best known for his role as Dr. Wong on Law & Order: Special Victims Unit. I give him outstanding marks for his impressions of characters both male and female, his handling of different accents, and just the overall listen-ability of his voice. He’s the best audiobook reader I’ve heard since Jim Dale did the Harry Potter series.
Posted by Shelley Workinger at 7:42 PM