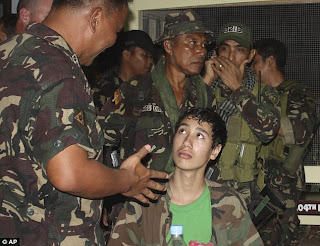 It’s hard to imagine a more frightening situation than being kidnapped by Al Qaeda mercenaries while on vacation. That’s precisely what happened to Kevin Lunsmann last year in the Philippines, and the 14-year-old from Virginia not only survived, but in fact rescued himself.

Kevin was taken hostage along with his mom and cousin by a dozen armed men who stormed their resort in the middle of the night and took them to a remote island. Held captive for 5 months – during which time his mother was released by paid ransom and his cousin escaped – Kevin somehow kept his wits and was ready when opportunity presented itself. He tricked his captors by saying he was going to bathe in a nearby stream, then took off, only to wander barefooted through the jungle for 2 days before being found by helpful villagers.

Impressed? See Kevin’s story here:
http://www.firstpost.com/topic/place/philippines-kidnapped-american-teen-hero-escapes-al-qaida-captors-in-phi-video-3A78bZ65UMI-782-1.html
Do you know a toast-worthy teen you’d like to see featured here at BWATE?
Comment below with your email address so we can get a post together!
Posted by Shelley Workinger at 8:34 PM