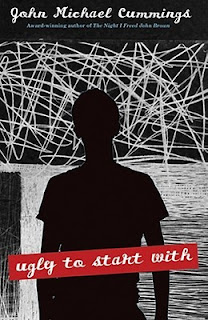 Jason Stevens, our 13-year-old protagonist, doesn’t eat much in this story, although that’s hardly surprising since his family’s home is the dilapidated one in town that of the more “upstanding” Harpers Ferry citizens is shocked to hear anyone actually lives in. His immediate family includes the father that he hoped was “gone for good,” the mother whom none of the other locals can understand having married crazy Bill Stevens in the first place, and the two older brothers who aren’t against him, but aren’t really for him, either. That being said, Jason’s probably better off within those walls, because beyond his front door Harpers Ferry boasts more than its fair share of characters. There’re very few folks to like between the neighbor-kid Mike, who acts as if “seeing [Jason] crying is the best thrill in the world,” to creepy Carter Randolph, who likes living on the mountain because “it’s lonelier than me.”

So there’s really no food of note until Jason goes to visit his somewhat-estranged grandfather in a nearby new gated community, which Jason knows is clearly better than his neighborhood because there’s “not even broken glass in the street.” Better, indeed; Granddad’s new lady-friend wheels out “a fancy cart full of the tiniest diamond-shaped sandwiches.”

At this impromptu luncheon, Granddad empathizes with Jason’s situation, telling him, “We’ve got to get you out of this place;” yet his girlfriend (whose money is enabling Granddad to live this new high-life) is convinced that Jason will never be more than the small-in-size-and-mind town that is his “heritage.” As soon as she belittles him (in what she surely believes is a subtle and gracious way), Jason notes that “the ham spread [has] no taste, the bread [is] stale, and the iced tea [is] warm.” He sums it up perfectly, in fact, when Granddad tries to excuse Monica as simply “playing devil’s advocate,” while Jason thinks to himself, “She’s the devil alright.”

And I have to agree. To make someone (actually two someones if you include Granddad) feel small – to crush the dreams of a child – is truly evil. Seems she’s the one who’s ugly to start with…and end with.

Wait; back up. Ham spread? As in deviled ham? Nice touch, Cummings. ;)
Posted by Shelley Workinger at 7:11 PM