FOODFIC: The Entertainer and the Dybbuk - Sid Fleischman 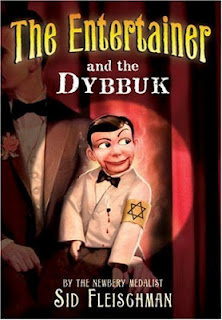 Ventriloquist Freddie the Great finally finds himself living up to his title when he’s suddenly possessed by a Jewish spirit  known as dybbuk – “a scrappy demon who glows as if spray-painted by moonlight.” Avrom (the dybbuk) assures the Freddie that he’s as “harmless as a slice of rye bread,” which of course makes me wonder, How harmless is rye bread? Can it in any way be used as a weapon? A poison?

The only link I can find between rye and “harm” is ergot poisoning, which results when a fungus infects grain products like rye and other cereals. There’s also Agatha Christie’s “A Pocketful of Rye,” but the rye in one victim’s pocket is only a clue to the killer’s motive, not a cause of death.

Okay, looks like we’re clear – rye does indeed seem to be harmless.  But is Avrom?

It doesn’t matter to Freddie; he just wants Avrom out. Now. So he goes to the church, where the priest tells him he needs an exorcism, but that the church can’t do Jewish demons. Then he finds a synagogue (not an easy feat in the aftermath of WWII) where the rabbi blasts a sacred horn in his ear to blow out the demon (and Freddie’s eardrum). When that doesn’t work, Freddie asks Avrom what it will take to make him go away. The demon answers, “Try chicken soup.”

Yes, it’s a smartass answer (as intended by Fleischman, who says in the back flap: “The Jewish sense of humor miraculously survived the Holocaust”), and an old wives’ tale. It also represents a sense of hopefulness in that people believe chicken soup cures sickness – whether by steaming out the sinuses, providing nutrients to fortify the system, or just ‘cuz. But it’s not the how or the why that’s important – it’s the universality of the belief in it. Despite the hugely different backgrounds and goals of Freddie, the American stage presence, and Avrom, the spirit of the murdered Jewish child, the two find common ground in their universal feelings of horror against war, genocide, barbarism, and revenge, which, unlike chicken soup, is sometimes better served cold.
Posted by Shelley Workinger at 7:16 PM