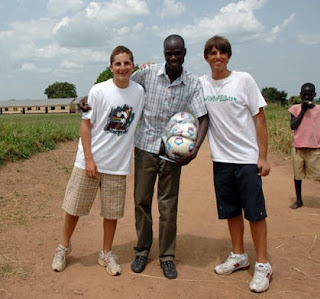 When 13-year-old Kyle Weiss travelled to Germany with his family for the 2006 World Cup, he came home with much more than memories of exciting soccer games. After learning from Angola fans how impoverished their homeland was – how the people live for soccer but are so lacking in resources that most have to kick a makeshift ball of garbage bags around a dusty lot – Kyle found a mission.

Along with older brother Garrett, he first thought of collecting soccer equipment to send to Africa, but when he realized what the kids needed most was a real space to play, they formed FUNDaFIELD – an organization to (you guessed it!) build soccer fields in developing countries.

$140,000 and 9 African fields later, FUNDaFIELD now boasts over 200 members doing not only outreach and fundraising, but also studying the benefits of organized sports and how they help kids stay in school and thrive under extremely difficult conditions.

To find out more about Kyle’s mission, visit:
http://fundafield.org/FUNDaFIELDsite/Intro.html

Do you know a toast-worthy teen you’d like to see featured here at BWATE?
Comment below with your email address so we can get a post together!
Posted by Shelley Workinger at 2:16 PM