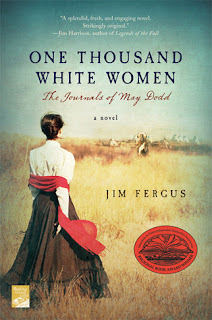 In this piece of alternate-history, one thousand white women are sent out West to marry warriors of the Cheyenne tribe and procreate, thus forever joining the two peoples in a uniquely and hopefully peaceful way. In reality, such a proposal was made by the Cheyenne chief, but never agreed to by President Grant, so it’s only fitting that the first fictional conversation between the group of “volunteers” as they ride the westward-bound train reads more alternative than historical.

When young and naïve bride-to-be Martha expresses her worries over wifely duties, ex-asylum-inmate-turned-betrothed May Dodd uses food to express the difference between a man who is well-endowed and one who is not:

You do know the difference between, let us say, a breakfast sausage and a bratwurst? A cornichon and a cucumber? she asks.

Certainly this wasn’t the first time I had to look up a new-to-me food* item, but it was the first time I did so in order to appreciate a sexual innuendo. (And only six short pages later, Susan Kelly, one of the red-haired, literally thick-as-thieves, Irish twins from Chicago, talks about the judge who threw them in jail after soliciting the sisters to be two halves of a bun around [his] sausage. Seems sausage was huge in 1875 – no innuendo intended.)

Anyway, the point is that no matter what crazy life she may be headed for, at that moment May is just happy to be able to laugh after suffering years of physical and emotional torture. Now, I won’t ruin the book by telling you if she keeps that newly-regained good humor once she reaches her new Nebraskan home, or if she flourishes in her new role as wife to Chief Little Wolf. I will, however, tell you that foods like grouse, elk, wild onion, and dandelion greens (and another savage delicacy that American readers may find as offensive as I imagine Hindus feel about our eating of cows, so animal-lovers may want to avoid page 108) are as foreign to May as the cornichon was to me.

Bottom line: whether it’s to find facts, food, or even family history, this story is sure to send you Googling. :)

* Sadly, all credit goes to the internet and not my 3 years of high school French for teaching me that cornichons are tiny gherkin pickles.
Posted by Shelley Workinger at 9:03 AM