Food is such an important part of who I am, especially as a Chinese-American growing up in Miami. I can still smell the favorite dishes my mother cooked, like stir-fry spicy shrimp or freshly steamed bao-tse (meat and vegetable stuffed buns).

Most of my childhood friends were Latin, and today I make Cuban picadillo from a friend’s recipe. I write about food for national publications and websites, including my own food blog, Eating With Hudson and Paradise, which is written with my two young children.

Since I love eating, I don’t think I fully trust others who don’t care for food. To me, a person who enjoys food understands herself more, and what she wants out of life. Loving food is loving life and everything it has to offer. It is only natural that the characters I create when I write enjoy eating as much as I do.

When I began writing my debut contemporary YA novel, Random, I didn’t set out to write about foodie teenagers, but my characters are always having meals and eating foods I personally cannot live without. Eating together in a group is integral to a social life. Sometimes the foods they make or eat reflect the mood of the scene or how a character is feeling.

The first time Tierney, the main protagonist, is alone with Tom, who is the new boy at school, they are hungry at a friend’s house. They cook what many teenagers love, frozen pizza, but they are so involved in their conversation and growing attraction that the pizza is burned to a crisp.

Rereading Random for this blog post, I laughed when I found two references to Trader Joe's, which is a chain of specialty grocery stores in California that we love. Most of their products are their own store brand, and our family can’t live without their well-known snacks. In the book, I mentioned Trader Joe’s Chocolate Ice Cream and Chocolate Cupcakes, which are the best store bought cupcakes I have ever tasted. Sadly, they have been discontinued.

Another aspect of food in Random, is how I used it to record landmarks in Los Angeles. After growing up in Miami, I moved to Los Angeles to attend the California Institute of the Arts. Having lived in the city for 14 years, many restaurants pinpoint different neighborhoods and memories. Much of the book is an homage to old Hollywood and Los Angeles.

Tom is new to LA, and as his relationship grows with Tierney, she plays tour guide and shows her side of the city to him. They drive to see the Hollywood Sign and visit the Griffith Observatory, where the film Rebel Without a Cause was shot. She takes him to some art galleries in Chinatown, and they eat pho, which is a type of noodle soup, at a small Vietnamese restaurant we also enjoy eating at on the Eastside. Los Angeles is a part of who Tierney is, and me, for that matter.

Teenagers aren’t always the biggest chefs, but when Tom finally cooks for Tierney, he makes grilled cheese sandwiches, the ultimate comfort food. However, she never tastes it. They immediately start fighting, and it ends up a gooey mess.

I was a vegetarian when I wrote the book, so all the food mentioned in the novel is vegetarian. I didn’t write overtly vegetarian dishes like tofu salad, but I quietly wrote only meatless foods, like homemade bread, bean soup, croissants and brick-oven pizza. I didn’t want to sound preachy, but I thought I could promote a certain healthy lifestyle - even though many other aspects of these characters' lives, not least their epic partying, are far from healthy!

Thank you so much, Shelley, for allowing me to ramble about one of my favorite subjects, eating. Food in books is such a fun and fascinating subject, and I’m glad that you have a blog about it. Food represents our deepest desires and who we are culturally and philosophically. We are what we eat!

Thanks for stopping by to share your food for thought, Charong! 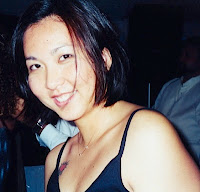 You can find Charong at:

Eating with Hudson and Paradise
Posted by Shelley Workinger at 9:11 PM