Food Words of the Year! 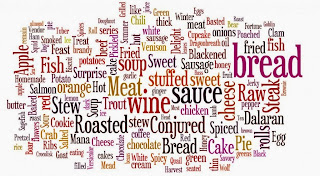 Every December as the year winds down, we look back over all the things that’ve come and gone with the flip of calendar pages – everything from music to fashion, movies to technology, books to cuisine. Maybe 2013 didn’t see lots of monumental events like the election of a new president or the demotion of a planet, but lots of changes did occur in one of my favorite areas: Words!

Out of the hundreds of new words that snagged dictionary slots in 2013, special honors went to “selfie,” the new word of the year in the U.S., and “omnishambles,” which took the title in the U.K. Many of the new words sprouted in my favorite way – as if from little hybrid seeds. My personal word-development strategy (in both my characters’ fictional realm as well as my own life) relies heavily on mash-ups, combining modern slang with fuddy-duddery. And clearly I’m not the only one; “fauxhawk” and “babymoon” are only some of the dozens of popular blends to join the OED/ODO* in 2013.

Of course, the listings I’m always most interested in are the FOOD words! 2013 brought many of my great loves – guac, pear cider, appletini, street food. The thing is, out of all of those, the only really new item is the appletini. Guac is just an abbreviation and the other two are simply preexisting words placed side-by-side. So, despite their deliciousness, I don’t quite see those terms merit their own dictionary entries. (Face it, if you can’t deduce what pear cider is without looking it up, you’re in trouble.)

Anyway, this deficit of new food words forces me to ask: Have we actually named and recorded every ingredient and delicacy in existence? Has our society gone so global that English has no more tacos or schnitzel or ugli left to discover on our planet?

And if so – if the only new food words from here on out are going to represent trends like the appletini – then won’t those food items go in and out of fashion so quickly that they’ll be added one year, only to become obsolete and ready for deletion the next?

Well, it turns out that no words are ever removed from the dictionary!** According to former OED editor Sarah Ogilvie, “If a word gets into the OED, it never leaves. If it becomes obsolete, we put a dagger beside it, but it never leaves.” Who knew?
I’m sure glad to hear this, both as a foodie and a reader. Otherwise how would future Twain readers taste corn-dodgers along with Huck and Jim? Or know how lucky they are to not have to eat curds and whey like Miss Muffett?

So thank you, OED, for keeping historical cuisine alive…and I hungrily await the discovery of sustenance on Mars to introduce new food words in the future. ;)

**Except for the 1972-1986 Burchfield years; he illicitly deleted “foreign” words in an attempt to preserve “true” English. Yes, he tried to take away our hummus and croissants, y’all!

Posted by Shelley Workinger at 9:45 AM