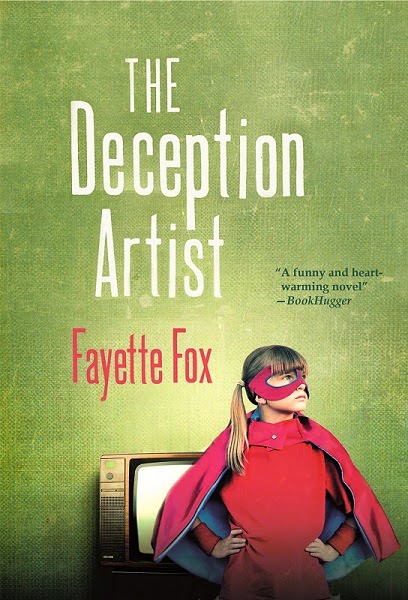 I love food, so it’s no surprise my debut novel reads like a well-stocked kitchen. The Deception Artist is told from the perspective of eight-year-old Ivy, who has a vivid imagination and lies so people will like her. Set in Northern California during the late 80’s, this sharp, funny story explores the dark heart of an ordinary family and finds out that make-believe isn’t just for kids.

Food plays an important role in my novel.

Budding friendships are nurtured in the school yard as grapes are traded for potato chips. During an astronaut game, green food coloring transforms Monterey jack into “moon cheese.” When Ivy’s brother is sick, she eats chocolate pudding in the hospital cafeteria, telling a stranger a ridiculous lie. At dinner, Ivy’s family eat retro classics like quiche, cheese pilaf casserole, and ham and zucchini skillet, while her parents argue. There’s a daring candy heist to cement a friendship, and an epic make-your-own-sundae party. Ivy and a friend hide under the kitchen table while Dad learns about soufflés from a woman who might be getting a little…too friendly with him.

I got a big kick inventing strange flavor combinations for a character’s baby food business. In later parts of the book, pureed concoctions like Banana Garbanzo Bonanza, Citrus Spinach Surprise, and Chicken Cherry Chickadee, are crafted in the family’s kitchen.

Most of all, I loved writing from Ivy’s perspective, like in this scene between Ivy and Mom.

“Does every story have a moral?” I ask, putting the lettuce in the fridge.
“No, some stories are just stories.”
“But does every fairytale have one?”
“I don’t know, honey. Most do.”
I try to figure out the moral of Snow White. Don’t be too beautiful? Don’t
eat apples?

What’s a food related lesson you learned as a kid? I’d love to hear your story in the comments!

Thanks for stopping by to share your food for thought, Fayette!

You can find Fayette here:

The Deception Artist has been shortlisted for the Edinburgh International Book Festival First Book Award and Amazon’s Rising Stars Award.

The novel is available in bookstores, on Amazon
and through Roaring Forties Press.
Posted by Shelley Workinger at 12:27 PM