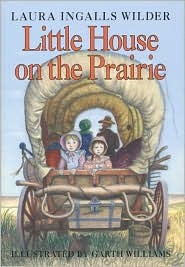 For anyone who doesn’t know, although Little House on the Prairie is the most well-known of Wilder’s titles, it’s actually the second book in the series, preceded by Little House in the Big Woods. And not that life in the big woods was a picnic, but it’s nothing compared to the trials of westward-moving life, i.e. weeks of riding in a covered wagon, followed by weeks of building a house log-by-log with things like having a roof and a floor being major milestones and getting glass for the 2 small window being the grandest of luxuries.

Under such circumstances, you can imagine that the food (in this case FoodFact rather than FoodFic) is going to be rustic, meager, and wholly dependent on the environment. We tend to romanticize that pioneer era of brave settlers venturing out, hungry for new lives, but we often forget that they found themselves just plain hungry a lot of the time.

In the Ingalls’ case, after months of traveling and then building – all on a diet of mostly game and bread – they were finally going to have fresh vegetables. They’d planted a full garden in which the peas and beans were already starting to come up; they’d a cache of potatoes snuggled deep in the earth, and they’d just plowed the corn into the soil…when they got the news that their perfect little house on the prairie had been built 3 miles on the wrong side of a territory line.

They’d wished and waited and worked for that blossoming patch of fresh life, but Pa doesn’t even wait for the official notification before packing up the family and hitting the road. Now, in both the book and TV show, Laura (and everyone else, really) idolizes Pa, acting as if he can say or do no wrong. But on their first night away from their home, as they eat another meal of meat and bread by a fire built on the side of the trail, Pa muses, “What fun the rabbits will have eating that garden we planted.” Seriously?!

The ever-composed Ma just says, “Don’t.” I guess that shows what a terrible prairie wife I would’ve made; I sure would’ve had a lot more to say to him than that.
Posted by Shelley Workinger at 9:14 PM