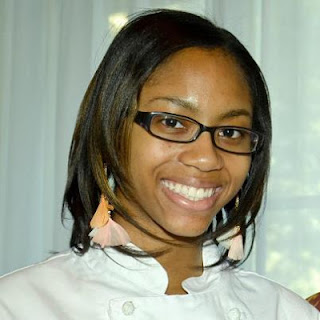 Shania Thomas became the first ever Chopped teen champion by composing a dessert of chocolate-stuffed crepes with popcorn crumble and raspberry topping from the mystery basket ingredients of zucchini, chocolate cake mix, crème fraiche, and movie theater popcorn. The NYC Food and Finance High School graduate fought her way to the final round by turning a mystery basket of gummy bacon, frozen lima beans, lemon sorbet, and salmon fillets into an appetizer of seared salmon with Asian marinade and lima bean salad; she then used cotton candy, chicken cutlets, Brussels sprouts, and French-fried onions to create an entrée of spicy chicken cutlets with bacon Brussels sprouts salad.

But Shania fills hearts as well as stomachs; the inspiring 17-year-old, who’s known she wanted to be a chef since she was just 4 years old and so has spent virtually her entire life working toward that goal, also cooks in memory of her brother, who tragically passed away before realizing his own dream to be a chef.

I think host Ted Allen best captured the highlight of the event, by noting: These kids showed more composure and creativity than most of the adult contestants that appear on the show.

So congratulations, Shania! I highly anticipate having dinner at your future restaurant; if I can get a reservation, that is. ;)


Do you know a toast-worthy teen you’d like to see featured here at BWATE?
Comment below with your email address so we can get a post together!
Posted by Shelley Workinger at 9:29 AM