FOODFIC: Please Welcome Bill McCurry, Author of Bring Us The Head Of The Velveteen Rabbit 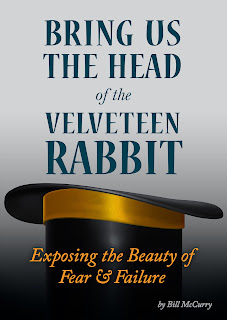 Is “Kumquat” The Funniest Word In The English Language?
Food and Humor

Food is just plain funny. I didn’t consciously think about that until Shelley asked me to guest on But What Are They Eating? Yet I should have known. I’ve seen my wife cook a lobster, and that’s incontrovertible evidence.

When writing this post, I used my brain to skim through my humor book Bring Us the Head of the Velveteen Rabbit, and I realized that the right food in the right place will make someone laugh instead of thumbing their remote to find Jersey Shore. Food makes a difference. For example, in some of my essays wisdom is dispensed by Fat Mike, proprietor of Fat Mike’s Rib Shack. The character just wouldn’t be the same if he owned Mike’s Restaurant, or Big Mike’s Hardware Store. You couldn’t see him stirring the barbeque sauce with a trowel that might have been used to build the pyramids at Giza, or waving his bean juice-stained fingers as he talks about politics and love. He is who he is because of the food he creates.

In another essay, “Thanksgiving Sucks,” I pitch a plan to change the holiday’s image. Thanksgiving is mainly about football and yams, which we can already get every weekend from August to February. At Thanksgiving we eat turkey and fall asleep on the couch, and that’s hardly as much fun as Halloween’s theme of “eat candy and dress like a Shanghai prostitute.” Sure, we can be thankful for the good things in our lives, but can we sell peanut butter candy in “good things in our lives” shapes? From a humor standpoint, these food references are critical. “Turkey” is synonymous with Thanksgiving, “eating candy” captures the soul of Halloween, and “peanut butter candy” grabs the cultural reference of selling those calorie bombs in every possible holiday shape. And yams? “Yams” is just a damn funny sounding word.

Different foods bring wonderful connotations when used in titles. “If You Read This You’ll Get a Cookie” makes it clear that the piece is about rewarding someone. Or bribing them. Or maybe punishing them if it’s a lousy cookie. Regardless, food evokes personal meanings in titles like “The Seductive Power of Cake” and “What Do You Mean Possum’s Not an Entrée?”

In the end, humor is about pain, and culturally we have a lot of pain tied up in how we feel about food. I’ll close by touching on a story from my book, about my distant uncle working in Alaska early in the 20th century. While building a pipeline, his crew unearthed a frozen mammoth. The carcass had to have been at least 11,000 years old and was probably older. The local Native Americans surrounded the mammoth, butchered it, cooked it, and ate it. To me, that story is painful in so many complicated ways that all I can do is laugh.

Thanks for stopping by to share your food for thought, Bill!

You can find Bill here:

Whims of Fairness Blog
Posted by Shelley Workinger at 6:09 PM