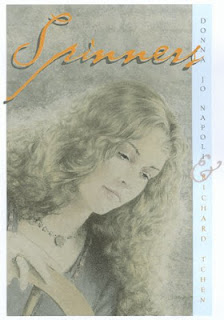 There’s nothing I like more than a book that gives the backstory of a well-known character. Except maybe a “what-if” alternative history/future, like what would’ve happened if Germany’d won WWII. Not that the two genres are necessarily mutually exclusive; going back to see how Hitler became who he was could easily set you up to then create a twisted variation of his story, since you’d now have a thousand little details from the past that could be changed to construct a new future.

Of course, here I probably should’ve used a different (and fictional) villain, like Cinderella’s wicked stepmother, for my example; Spinners is a revelation behind a fairy tale, you see. In this book, Napoli and Tchen tell the story of perhaps the least-known well-known character of lore: Rumplestiltskin.

As you can surmise from the abhorrent demand (her first-born child) he makes of the young maiden for whom he spins straw into gold in the age-old tale, Rump is not a pleasant fellow. But did you ever wonder what happened to make him so deplorable? And further, what would make such a lecherous troll of a man even want a soft and cuddly (and just as often drooly and whiny) baby?

The answer lies in a past every bit as cruel as the man Rump becomes…and in the midst of that tale is where I also found my oddest FoodFic passage to date. Like everyone else, Rump was at one point young and in love and, also like many suitors in the days of yore, denied his love’s hand in marriage by her father. In his desperation to change the miller’s mind, young Rump (though this takes place before he’s been dubbed that, actually) vows to prove his worth by creating for his would-be bride a wedding dress woven of gold.

Since the humble tailor, who’s already spent most of his savings on a betrothal ring, cannot afford gold cloth, he must find a way to make it out of the only material he owns: straw. He labors day and night trying to perform the impossible feat, until the lack of sleep and food drive him, crawling, to his neighbor’s chicken coop, where he reaches into a nest and grabs an egg. He cracks it into his mouth and swallows it whole. He eats another. And another. And another.

Blech! I’ll let you read how it all plays out for yourselves, but know that foulest food scene I’ve ever read pretty much sets the tone for the rest of Rump’s tale, which ends with not more eggs, but a broken and rotten old man. But that’s the part you already knew. ;)
Posted by Shelley Workinger at 9:30 AM